UK drying up as Britain reels under yet another heatwave

Britain is reeling under yet another heat wave, and the government has issued an amber warning.

Another heatwave has engulfed the United Kingdom. Temperatures are expected to reach 35 degrees Celsius by Friday and Saturday, prompting an amber weather warning (the second-most severe after red) and a hosepipe ban in some areas.

The current heat wave is milder than the one in July when temperatures hovered around 40 degrees Celsius, but a prolonged English summer with extreme heat and dryness is unprecedented. In fact, such a prolonged heatwave was seen last in 1976 though the temperatures did not touch quite so high then, a Met Office report suggests.

The Met office said, “The widespread nature of the heat meant that the average maximum temperature across the whole of the UK exceeded 30°C for the first time and the UK had its two hottest days on record by this measurement in a series that goes back to 1960."

"I've never seen a summer like this before," Ryan, a Wales resident, said while feeding the pigeons in Hyde Park.

Parks and greens have suffered the most as water reserves have run dry. The stretches of green have turned brown, dry, and parched, making it an ideal breeding ground for wildfires.

However, measures such as the government's hosepipe ban, which was implemented to limit water usage, can be counterproductive at times because they can cause fires. The emergency services are on standby.

Guillaume came all the way from the South of France to escape the heat, expecting chilly winds and a milder summer, but was gravely disappointed.

"I chose London because it’s usually chilly and milder than where I am from. So I usually use this [trip] to escape the heat wave, but not this time," Guillaume said as he searched for a lawn chair in the shade in one of London's parks.

The warning from the weather office said that there is "very little meaningful rain" in the near future and temperatures will be on the rise in the coming week. 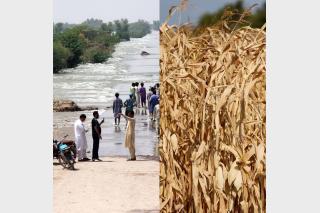 UK drying up as Britain reels under yet another heatwave