“This is the fulfilment of a long-cherished dream for me,” says Narayana Bhattathiri about ‘Ka Ch Ta Tha Pa’, a gallery for Malayalam calligraphy. Familiar to readers of Malayalam as Artist Bhattathiri, the master calligrapher has constructed the gallery on the top floor of his house in Forest Office Lane, Vazhuthacaud, Thiruvananthapuram, Kerala, India.

“This might be the first-of-its-kind for Malayalam calligraphy. There are galleries in cities such as Mumbai and Delhi with exhibits in Devanagari script,” says Bhattathiri.

He has been on a one-man mission for over four decades to popularise Malayalam calligraphy. “It has not been getting the patronage it deserves. That is why I have been posting calligraphy works daily on my Facebook page (Bhattathiri Calligraphy) since 2015 and have also been conducting online and offline workshops. However, people would often wish to see the works in person. But it is not possible to hold exhibitions everywhere and that set me thinking about opening a gallery to exhibit what I have done,” says the 63-year-old artist. The number of designs posted on his page has crossed 3,700 and counting.

He feels that calligraphy is not being promoted in South India in spite of there being some excellent calligraphers in all languages. “Their artistry is restricted to titles of books, magazines and films. It is still not being considered as a work of art,” he says.

Calligraphy, coined from the Greek words for ‘beauty’ ( kallos) and ‘to write’ ( graphein), is all about writing with your hand, albeit beautifully. “There is no set rule or parameters for this. It is up to the practitioner to give it an identity. I don’t plan what I am going to write. It just flows,” he adds. The designs are born during his two-hour practice that happens every day at 3 am. His workspace is a room where there is a custom-made table, high enough for him to stand and draw. He makes two works daily that are posted on his Facebook page. “Practice is what makes you grow,” he asserts.

The 35-plus exhibits at the gallery include both old and new works. Each has its own visual language — a particular alphabet or a word goes through a sea change as it gets curls, loops, twists, turns and innovative characteristics. That is not all. In each work, the alphabet (or letters of the alphabet) is blended with lines from a Malayalam poem. “The design has nothing to do with the lines I choose that day. The verse has to have that particular alphabet or word. What I enjoy about the process is that I recite the lines as I write them,” he says. The best part is to watch how he incorporates the poem in different shapes or geometric figures — a circle, a square, a rectangle and the like. His use of colours enhances each work.

He stresses that each work on display is the first draft. That is the case of every design he creates. “Once it is done, I don’t go for any changes or redraw it. Even if the stroke is not clear, I just leave it like that,” he says. The artist holds that it is not necessary that a viewer should understand everything that is written. “People may not be able to read all the letters. But that’s okay. When we enjoy Arabic or Chinese calligraphy, do we try to read what is written? The same applies for Malayalam calligraphy. They are meant to be seen,” he believes.

A native of Pandalam, he remembers getting inspired by the typefaces he saw at his father’s printing press as a young boy. After moving to Thiruvananthapuram, he studied painting at the College of Fine Arts and used to do part-time work as an artist. He started assisting S Rajendran, the art director, at Kalakaumudi magazine where he got the title calligrapher. His first work was writing the title of a story and there started his journey towards designing titles of several seminal books in Malayalam literature. He is a recipient of the Jikji Prize for Calligraphy awarded by the Cheongju Cultural Centre, Seoul, South Korea, for 2017, 2018 and 2019. His works are exhibits at this Centre. His designs are also showcased at Calligraphy Stone Park in Herbin, China.

“When I look at this gallery, I am satisfied that I have done something for posterity. What is the use in drawing something every day and keeping it at home?” he says.

The low tables arranged in the gallery are for the calligraphy classes he is planning to start soon. The gallery also showcases three works by veteran calligrapher Achyut Palav.

Artist Bose Krishnamachari opens ‘Ka Cha Ta Tha Pa’ on August 2 at 9 am. Entry is free for public from 9am to 8pm. It is closed on Mondays. 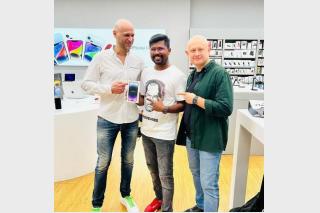 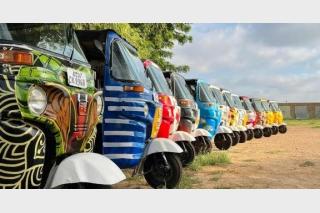 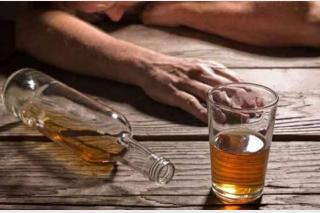